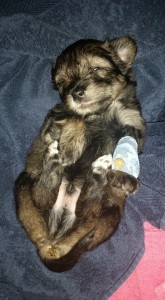 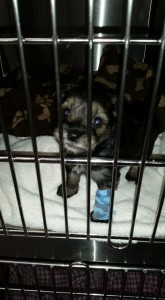 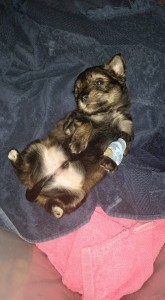 Bruno Update: Early Saturday morning this baby scared me to death because he vomited several times and became weak. I took him to the Animal Urgent care where radiographs were done which showed a large amount of gas and his intestinal area was very dialated. We started an IV medication to help stop the vomiting and some fluids. He responded fairly well to that. I went back 4 hours later to repeat an x ray and the gas was moving which was a good sign. Throughout the night Bruno had terrible smelling greenish sticky diarrhea. He ate a tiny amount, but still weak and definitely not the Bruno I know. My gut told me to get more aggressive because time is not on your side when a one month old puppy is sick..they fade incredibly fast… This morning I headed back to the hospital for more aggressive treatment. Now this little guy is back to himself with no vomiting and acceptable looking poop. I’m confident he is going to be fine smile emoticon Thank you all for the prayers and positive thoughts♡ Gina