1/25/16 – Good Morning Happy Update – Remember little Sommerset. It was early September when she was found under a bush at 3 weeks old and brought to Gina at the emergency hospital. Shortly after being rescued, her skin started blistering and falling off. She was eventually taken to Michigan State University where she had surgery. Once again, the love and care of the staff at the Animal Urgent and Critical Care Center and the skilled staff at MSU saved her life (not to mention the kindness of the rescuer). A big thanks, also, to our great friends, Venus and Jeff, who later took in Sommerset and adopted her. Here she is when she was rescued and the other day on her way for a check-up at MSU. Isn’t she beautiful? ~ diana
P.S. Her name is now Sophia 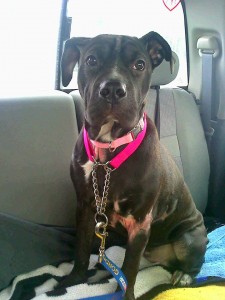 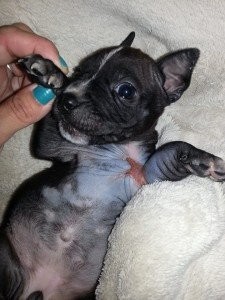