1/24/16 – Another feel good ‘before and after’ story for this chilly Sunday morning. This is Peanut. Many of you will remember his story but I know that animal lovers never get tired of hearing happy updates. Peanut goes back to 2010 shortly after we started 4 Paws 1 Heart. A man came into the emergency and told Gina that he found this lifeless little body in the corner of a room at a relative’s house. He, at first, thought it was a towel or rag that someone had thrown on the floor; then he realized that the ‘rag’ was a dog. He asked his relatives about the animal and they told him that they no longer wanted the dog. That’s when he took action and brought him to the emergency hospital.

That night, he became one of our first 4p1h babies. He went through a lot in those early days. He couldn’t even lift his head to eat but with Gina’s love and the professional care from the staff, he began to put on weight. After a number of months, he was ready to be adopted. Luckily, a wonderful, caring woman fell in love with Peanut and adopted him. Today he spends his summers on a lake and his winters in Florida. He goes for boat rides and is just loving life. Peanut’s mom just posted this photo of him wearing his new sweater because it’s been a little chilly down there. Once again, your donations make miracles happen! ~ diana 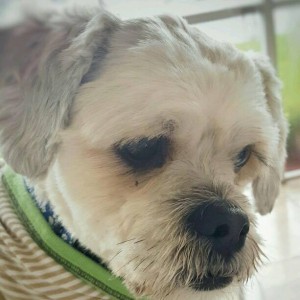 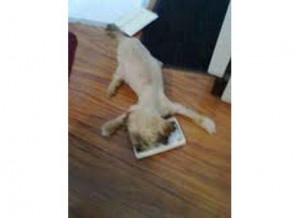