Skip to primary content
3/9/16 – This poor dog was found going through the trash at a local establishment. The rescuer posted him on For the Love of Louie and actually found the ‘owner’. The ‘owner’ said he had given his dog to a ‘friend’ when he moved. It turns out that the ‘friend’ lost the dog two months ago but never said anything to the ‘owner’. This poor animal had been roaming the streets searching for food for over two months!!! Nonetheless, none of these people wanted him back; and now he has been found to be heart worm positive. This poor dog can’t catch a break. The rescuer can’t continue to shelter Chace because Chace can’t be neutered and the rescuer has a 10 year old female who is too old to spay. 4 Paws 1 Heart will pay for his heart worm treatment if a rescue could take him in or if a qualified person could give him a home. The rescuer says that he is very sweet and gets along well with other dogs; he hasn’t been cat tested. Please private message me if you can help or know of someone who can. ~ diana 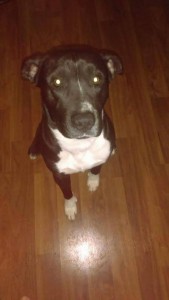