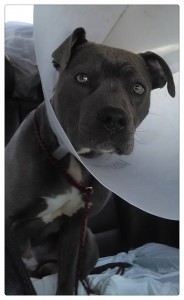 4/20/16 – After being rescued and taken to a vet by a very kind man, Reggie, was released to a rescue this morning and brought to anotherveterinary. 4 Paws 1 Heart is paying for Reggie’s medical treatment, as promised. Here is a report from the rescue. Say a little prayer that Reggie will recover without additional surgery. He is quite a handsome fellow~ diana

“They couldn’t get a fecal because he pooped on the lawn when we picked him up. So as soon as he poops I’m going to run it back to our veterinary. They took blood, most of those results will be available later. The heart worm results will be available tomorrow.
His rectal stitches look good he and his rectum itself appears to be holding. It’s been in for 4 days, the doctor wants to leave it in for 2-3 more days & then take it out to see how he does. If it doesn’t hold, they’ll have to go in through his stomach & pull it back & stitch it up from the inside. He said about 90% of cases don’t need that procedure because what he has now usually corrects it.
He lost 8lbs in the 5 days since he was initially rescued. He weighs 41lbs now. He’s pretty skinny. Lol… He kept stealing bags of dog food off the shelf at the vet & walking off with them. The vet said to give him chicken & rice the next few days.
He really likes other dogs. He wanted to play with everyone at the vet. He’s really friendly & sweet. The vet estimates his age at about a year – year & a half. ~ Shawn”