916/16 – Last month I received a call for help from a woman in the Jackson, MI area. She had been driving her car on a major highway and saw, what looked to be a kitten, thrown out of the car’s window. She immediately pulled over and was able to get the cat who did not seem to be much older than a kitten. The cat had an indentation around the neck where a collar had obviously been. The cat had obviously been a pet at one time because she immediately began to snuggle and purr. Five weeks later, this beautiful cat, now named Shadow (because she is grey and follows the rescuer every where she goes), had 3 kittens. Unfortunately, one kitten died because Shadow’s milk had dried up before the rescuers realized it. The rescuers then immediately started to bottle feed the rest. As you can see, the kittens (Latte and Mocha) are now doing great. 4 Paws 1 Heart was happy to pay for Shadow’s and the kittens’ spay/neuter, vaccinations, and testing. They are now ready to be adopted. Anyone interested in adopting these beauties should contact Jean at: goldberry@herrickmi.us Remember that everyone is in the Jackson, MI area. 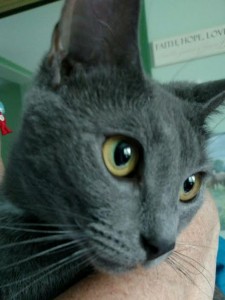 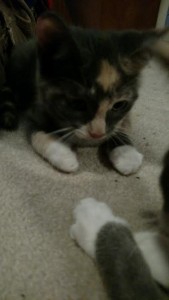 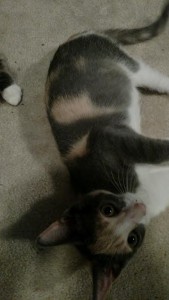 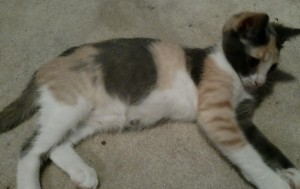