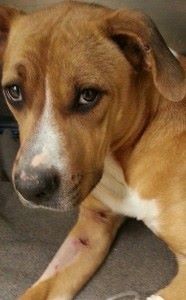 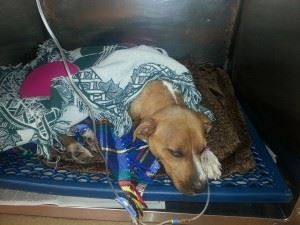 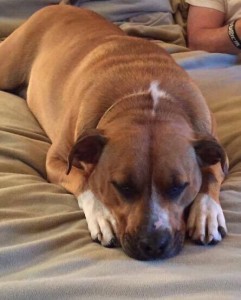 12/1/16 – More Happy Updates Because YOU help us make miracles happen. Remember Tobias? It was November 29, 2014 when two good Samaritans witnessed a hit-and-run involving a dog (in the Livonia, MI area). They immediately picked up his injured body and began looking for help. It was about midnight, freezing cold, and they called several places–most were closed. And then, they contacted the Animal Urgent and Critical Care Center. Gina offered to help by covering the cost of the dog’s medical needs because, at that point, we didn’t know if the dog had an owner. Immediately, that night the staff tried to stabilize him as he was in shock and they had to support his injuries with pain management. He had a fractured pelvis and possibly ligament damaged in his knee. Shortly after arriving, the dog, now named Tobias, had to have emergency surgery due to severe trauma from being hit by a car. About 5 inches of dead intestine had to be removed because he was regurgitating and was very uncomfortable despite pain management. Exploratory surgery was done and we could not thank Dr. Maria Rivera and Dr. David Balaj enough for literally saving this this dog’s life!!! What occurred inside of Tobias was RARE, but without surgery that night, he probably would have eventually died–very soon. Besides everything found during surgery, Tobias also had 3 pelvic fractures that needed time to heal with cage rest.

This was yet another dog that was delivered to us for help and given a second chance. Tobias’ age was estimated at 1-2yrs old and the owners never came forward.

When Tobias was ready to be released from the hospital, a friend of 4 Paws 1 Heart (who happened to be the wife of Joy’s rescuer, Michigan State Trooper Joel), offered to take in Tobias during his recovery and assist with finding him a forever home. Fast forward to now and Tobias is now living the life of much love and happiness. As I’ve often said, the lives we’ve saved are the result of many caring people coming together toward one goal–the animal. Thank you to our wonderful vets and vet techs, rescuers, fosters, and, most importantly, donors. May God Bless You All, ~ diana
.