3/16/17 – It was in early February that we got a call for help from a supporter of 4 Paws 1 Heart. A cat he had been feeding for a few months had shown up on his porch, injured. He thought the cat had been under a care or gotten into a bad fight. The little guy was dirty and had blood around his eye/nose area. Unfortunately, our friend did not have a trap. It was Superbowl Sunday, when this caring man drove all the way from Lansing, MI to St. Clair Shores, MI (about 90+ minutes) to borrow our trap and get advice from our friend, Master Trapper Debra B., and at least get Jinxy to a vet. After a bit, he was able to trap him and have him examined by a local vet. After about two weeks, Jinxy was transported to Debra where he was taken in by our friends at A Hopeful Heart Animal Rescue. We in turn provided medical dollars for Jinxy’s neutering and future medical needs. We are so very thankful when we are able to make a difference in not only our animal lives but in the lives of people who care. ~ diana 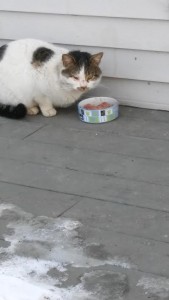