3/22/17 – Happy Update! It was just a little over one month ago when I received a call about this very sweet cat who had been living in a managed cat community. While the caretakers of the community were trying to save the 21 cats in the community from a exterminator company who had been hired by the condominium complex to ‘get rid of” the cats, Meadow showed up with obvious injuries. The bone below her mouth was exposed and some think or one had obviously attacked her. During the first go around in the hospital, poor Meadow waited six days to get surgery. Finally, when she had surgery it was also determined that her jaw had been broken, so it was decided to remove some teeth so that the jaw would align better. Shortly after the surgery, she again was forced to stay in the hospital. A doctor who did not do the surgery noticed something and felt the surgeon needed to see her. This resulted in another few days in the hospital while poor Meadow waited to see the surgeon. Well, the good news is that she is healing well and happy to be without pain and loved. Best Wishes for a long life for sweet Meadow. ~ diana 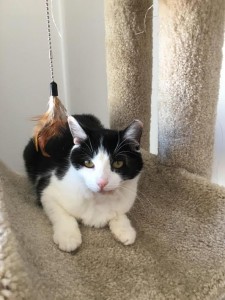 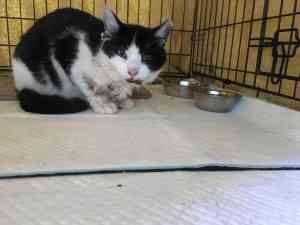