4/7/17 – So happy we can be there for the abandoned and abused. We were contacted by a friend of 4 Paws 1 Heart who cares for community cats. One of the guys she had been caring for showed up with a large abscess on his face. Unfortunately, it took a couple of days to catch him but thankfully it happened yesterday and our great friends at Rescue Veterinary Services squeezed us in. Smudge had obviously been in pain and as you can see from Pam Clarke‘s report, his injuries were greater than thought. As she said, Smudge will be on the road to recovery and 4 Paws 1 Heart took care of the entire bill.. ~ diana 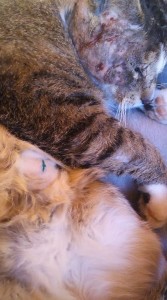 4/8/17 Update:  Smudge after his surgery, now sleeping soundly. Pam says that he was obviously someone’s cat at one time. He just wants to rub up to her and purrs constantly. When she puts food down, he eats it so fast it’s obvious that he had to ‘fight’ amongst others to eat. I just can’t imagine what life is like for an animal who was once in a home now having to live in the wild not knowing how to fend for himself. Many prayers for this little guy. Unfortunately, he was found to be FIV positive but this is not a death sentence.  His rescuer will keep Smudge inside and will try to find him the perfect home.~ diana