6/7/17 (9:01 a.m.) UPDATE: Hope remains on medication. She had another seizure yesterday, late afternoon. She did have x rays done of her head and chest and nothing was found. The doctor reported that shrapnel was found in the face, neck, and chest. It appears that her orbital bone may have taken the brunt of the gunshot. The hospital staff said that Hope is very emaciated and is very nice. She went for two walks yesterday, but today she wasn’t interested. Hope does have a fractured orbital bone and it is still unsure whether her eyesight was affected. Hope will be in the hospital for a couple of days while the staff continues to watch over her to ensure no abscesses form in her injuries. We have committed to Hope’s recovery and will assist the rescue with ensuring Hope finds a safe and loving home. ~ diana

6/6/17 (6:00p.m.) Latest report is that Hope was resting and eating. No further word but so happy they seemed to have controlled her seizures. – Diana

6/6/17 (1:00p.m.) UPDATE: The doctor believes the bullet may have just grazed Hope but fractured her orbital socket and there appears to be shrapnel from the bullet. The seizures have stopped and when Hope is stable, x rays will be taken. ~ diana

6/6/17 (11:09 a.m.) UPDATE: X Rays cannot be done until the seizures are stopped. Hope is now heavily medicated. The doctor thinks her orbital bone is broken and she may now be blind in one eye. The doctor is also afraid that the bullet is in her neck. I’m afraid that we are going to need financial help from our friends so if you can, please donate to Hope’s care by using the paypal link on this page or mail a check to P.O. Box 84, St. Clair Shores, MI 48080 We want to give this girl a second chance if at all possible and someone has stepped up to foster her if we can save her. ~ diana

6/6/17 – Prayer Warriors Needed – This is Hope. Last night I received a call about a very sweet dog who was found laying in a field; she appeared to be purposely shot in the head. This morning she was picked up by a friend of 4p1h and brought to a veterinary hospital. On the long ride to the hospital, poor Hope was having seizures and actually got her head stuck between the car door and the car seat. She is with the doctor now and it is thought that she has been like this for at least 4 days. An exit hole could not be seen so it is not known whether the bullet is still in Hope or if the wound was more of a graze. We will learn more later. In the meantime, please pray for this sweet animal and the many others. There are far too many animals walking the streets being prey to many sub humans. ~ diana 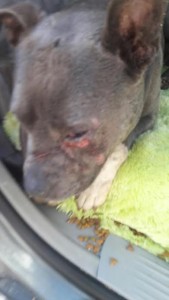 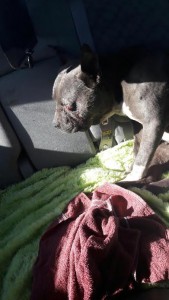