6/26/17 – This little one was found running in the middle of the road and while good samaritans were trying to rescue her, she got hit by a car. We were contacted because she was bleeding and there was concern about her injuries. She was immediately taken to a vet with our authorization and a microchip was found. Unfortunately, it was found that her owner had died and that she was left to family members who were contacted. Because of property/hold laws nothing could be done other than of an emergency nature so we made sure she was not in pain and was treated with antibiotics. As of today, the family has not returned the call and the person who rescued her has found a rescue who will take her in. Lulu is fine at this time but we will do whatever is necessary when needed. ~ diana 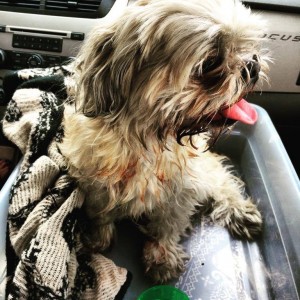