9/6/17 – Update:  Stars and Stripes were ‘victims’ of foster failures.  They have been officially adopted by their foster parents. 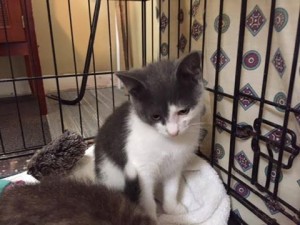 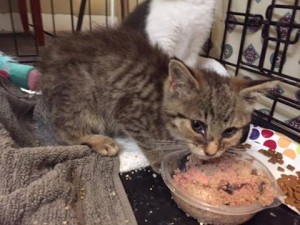 8/11/17 – To say this has been one heck of a summer would be an understatement! Almost 7 years of spay/neuter (and that is just our one organization) and yet the kittens continue to keep coming out of every nook and cranny. And, not only, being seen, but being very sick with upper respiratory infections and with serious injuries. These two, Star and Stripes, were two of 8 kittens found in one yard. Unfortunately, four of the kittens, who were very young, did not survive. Two of the older kittens (Jodie and Josie) are surviving beautifully with our friend Patricia B. and have had their blood tested. Now, the last (?) two have been rescued. One of the kittens may be related to Jodie and because they were found in the same yard, they had their blood tested and all was negative. Star and Stripes are doing well and are looking for a rescue organization/foster or adopters. They are shy but are safe and living with their rescuer Christine. All medical has been taken care of by 4 Paws 1 Heart. Anyone who would like to foster/adopt Star and Stripes should contact: cldivito@oakland.edu