10/17/17 – Dear Friends, please say a prayer for Dutch and if you possibly can, make a donation to help with his surgery. Dutch was rescued by the police from an abusive situation. His leg was broken at the femur and nothing had been done for over one month to get him any help. The owners surrendered Dutch to the police and he was given to a very kind person who had reported the abuse. When Dutch, who was in much pain, was taken to the vet by his rescuer, the doctor’s recommendation was to install a plate and pins at a cost of over $3,000. The rescuer had already paid for the x-rays and visit but could not afford the surgery; he was told to contact 4 Paws 1 Heart.
As many of you know, we have had many serious cases this summer and fall and could not afford the surgery either. I discussed getting a second opinion from one of our favorite doctors at Patterson Veterinary and the rescuer agreed even though our vet was on the other side of town.
Dutch was seen on Friday
Our doctor was not as confident that a plate and pins would help Dutch in that the break had occurred over one month ago. Another option was to amputate the leg, which is what was decided. The rescuer did not want to put Dutch through any more than necessary. The surgery, including Dutch’s neuter, is being done today. I will make sure to give an update.
If you can make a donation to help with Dutch, please use the paypal link on this page or on our website 4paws1heart.org, or by mail at P.O. Box 84, St. Clair Shores, MI 48080. Thanks!! ~ diana 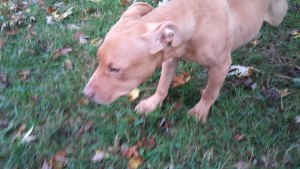 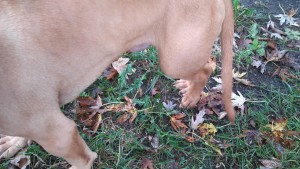