“My name is Riley and I heard about your organization from my coworker. I have a 2-3 year old cat that was thrown out and ended up coming back to their owners house and the owner did not want to keep her after she came back and wanted to take her to a shelter but I didn’t want her to sit in a cage so I took her in and decided to help. She ended up coming back with what looks like a missing toe, a cut on her neck and the pad of her foot is cut slightly also. I know she also does not have any shots or has been fixed. I want to be able to help her get back to her healthy self and everything she needs and find her a home but I’m also a college student and trying to pay bills and I just need some help to pay for the bills she’ll have.”

Can you imagine this very sweet, tiny girl being thrown out to fend for herself after having lived inside. I asked Riley to get a signed surrender from the owner who threw her out like garbage, which Riley did. Jane was then seen by one of our favorite veterinarians and it was found that Jane just had some minor injuries to her paw which was treated. She was also tested, vaccinated, and spayed and is doing well. Riley may have the perfect adopter for her. Paws crossed. ~ diana 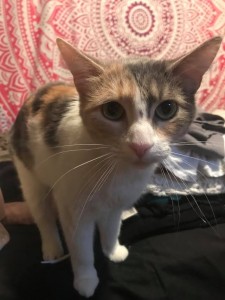 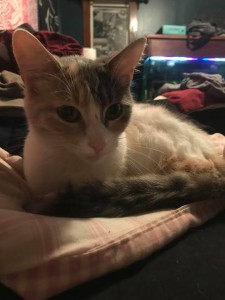