12/26/17 – Continued prayers for the abandoned, stray, and abused forced to fend for themselves in these frigid temperatures. Gina was praying for all of the animals who are alone and prayed that she would be called on to save someone — well, God called on her to save two — a dog (Gizmo) and a frozen kitty. Here is the story of Blizzard.
“Blizzard is about 6 months old, and was found in a garage last Wednesday. He was nearly frozen to death. Chances are he became trapped inside the garage unable to access food or water. He was unresponsive and suffering from hypothermia and hypoglycemia. With aggressive care he has stabilized, but he is still very weak. There is nothing to him aside from an emaciated body. He is with me, receiving around-the-clock care consisting of keeping him warm, fed, and hydrated. Food is challenging for him because he is having a hard time swallowing plus he has a little bit of a cold. Small amounts of watered down canned food several times a day is helping. I am confident that he will be ok, but any longer in this condition and he would’ve died in the cold from starvation. Please say prayers for him to grow stronger every day. I will keep you posted. ~ Gina” ~ diana 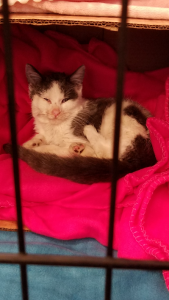 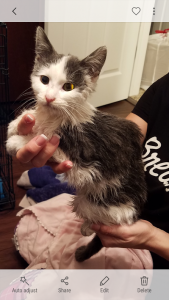