“Sometime in mid-October, while my husband was working in the garage, a little cat wandered in. She ran out as soon as she noticed him, but we started seeing her around the house more often and she always appeared to be trying to dig something out of the lawn to eat. She was very small and we couldn’t get close to her, so from our vantage point she looked to be an older kitten or very young cat. She started showing up at our door wall every morning about 6 and staying close by all day. The weather was getting colder and there were quite a few thunderstorms. We left the side door of the garage open and she came in for shelter one stormy night and decided not to leave. She had a voracious appetite and would devour a can of food in minutes. It took awhile for her to allow us to pet her and pick her up. When I could finally handle her, I could see that her coat was in really bad shape. Her tail was almost bare-I thought she might have mange or some type of skin infection. On Nov 14th, I took her to All About Animals for vaccines and to be tested for HIV and Leukemia. I still thought she was very young because of her size. The vet there examined her and said he thought she was pregnant; but said he couldn’t say for certain unless she had an x-ray or ultrasound-which they did not have. He said if she wasn’t pregnant, there was definitely something going on in her uterus. Thankfully, she was negative for HIV and feline leukemia and her age was estimated to be 7 years. They checked her for fleas and examined her skin and felt the condition of her fur was due to malnutrition and a very tough life-no fleas, mange, or mites. Her coat was so bad they couldn’t tell if she was a Tortie or a Tabby. The next day, my husband took her to a veterinary Clinic for an x-ray. The vet tech said she didn’t see any kittens but said the vet would call us after he read the x-ray. We paid $50 for the x-ray and despite numerous calls, the vet never called us back with results. I then took her to an affiliated veterinary clinic for an ultrasound. There, the doctor said that they could see her uterus on the ultrasound-which was not normal; however, there were no kittens. She palpated her abdomen and didn’t feel that her uterus was enlarged. After doing a fecal check for worms (negative), she did blood work and kitty had an elevated white count. She was given an antibiotic injection and I was told to wait at least two weeks to have her spayed. At this point, I had spent approximately $330 and she was still not vaccinated or spayed and we didn’t know the cause of her elevated white count.

My sister took her in for the next two weeks, but things did not go well with her cat; so I got her back. I had her stay in the garage for a few day to decompress as she was quite stressed by the whole ordeal. It was getting really cold and even though she had a little house and heated pad, I hated leaving her in the garage. Once she calmed down and would let me handle her again, I started calling around for a spay appt. I called another affiliated veterinary clinic and they weren’t able to get her in until Dec 26 and my gut was telling me she needed to get in sooner. I asked them for the name of some reputable rescues because I was in dire need of advice. I just didn’t know if I should turn her over to a rescue, allow her to stay in the garage, or try to introduce her to my two cats and two dogs. They gave me Diana’s number at 4 Paws 1 Heart. Diana was so very helpful. She spent a lot of time explaining how to slowly introduce her to my animals and offered to authorize payment for her spay and vaccines. I was shocked; but so happy. With Diana’s help, I was able to get her an appointment within two days! Everyone at the clinic was just wonderful. Turned out, our poor girl had a very severe uterine infection. They could not believe how huge her uterus was and even took pictures because it was so grossly enlarged and infected. Untreated, this infection would have killed her, so thank God for Diana helping to get her an appointment sooner than Dec 26. I don’t think she would have made it that long.

When we picked her up after her surgery, she became an indoor cat! I work from home, so I am in the office with her for at least 9 hours a day. The first couple of days she would only awaken to eat-but she has a little more energy everyday and seems to be adjusting to her new life indoors. She loves to be petted and has the cutest way of plopping down and rolling on her back. Her coat is coming in and she is a long-haired Tabby. I plan on taking it extremely slow with introducing her to the other animals and God willing, this little one will have a long life, free of sickness and starvation-she has known enough suffering in her 6 years.

I want to express my gratitude to Diana and any one who has donated to this worthy cause. Please know what a difference your donations make in the lives of these helpless animals. 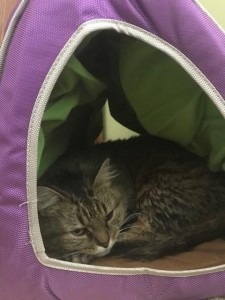 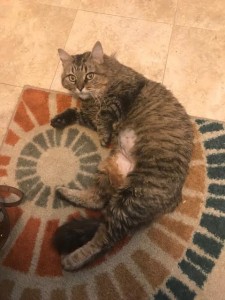 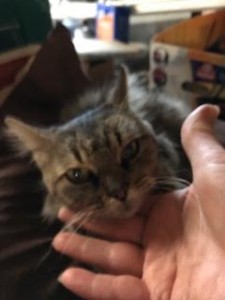