1/2/18 – As you may know, last week I toured the Macomb County Animal Control Shelter along with Jacob, the young man who raised money and food. While at the shelter, I looked up a new employee who has worked with a rescue we’ve helped in the past. I told her if she ever needed our help, to let me know. As I’ve said many times, municipal shelters just aren’t funded to cover significant medical needs. The next day, she called me to tell me about Pogo. Pogo was brought into the shelter after having been hit by a car. X-Rays showed he had a broken leg. He was given pain medication and kept contained in hopes an owner would show up; none ever did. I was asked if we could cover his medical, which might include an amputation, if a rescue could be found. I agreed and a rescue, Make A Difference, offered to take in Pogo. Pogo was taken to the hospital. The doctor there advised that Pogo’s hip was dislocated and although the leg could be saved, he would still require surgery. Pogo is now on standby for surgery (which will include neutering), so please say a little prayer for him. I will update when I hear from the rescue. ~ diana 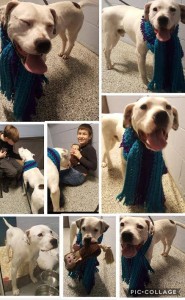