3/10/18 – RIP Sweet Stanley. It was January 11, 2018 when I got the call. Would 4 Paws 1 Heart cover Stanley’s medical. He was found lethargic and nearly frozen in a cat community. The doctor determined that Stanley (a girl) was very high positive for fiv and she was very emaciated. Our friend, Jo A. took her in and gave her love until yesterday when she had to make that very difficult decision. Stanley had been eating and drinking but when she was picked up yesterday to go to the vet for a re-examination, she was lethargic and appeared very dehydrated. Our friend and transporter, Debra B.. was concerned that she would not live through the ride. The doctor later called me and advised that Stanley had a serious gum infection, the fiv appeared to be worsening and that although she had been eating and drinking, she was very dehydrated and her organs seemed to be shutting down. Stanley was in definite distress and with the doctor’s recommendation, we all agreed to let Stanley cross the rainbow bridge so that she could again be that happy, playful kitty she probably once was. Unfortunately, Stanley was probably one of thousands of cats who either break out of their homes and never are re-united or one who was dumped by her owners. May God bless all of the rescuers/fosters/transporters/doctors who are so devoted to these abandoned animals. Stanley had two months of warmth and love and left this earth in the arms of a very kind woman at Patterson Veterinary. ~ diana 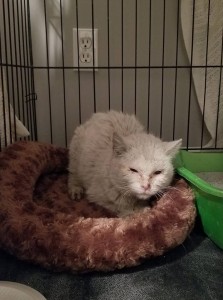