4/2/18 – Mama appeared at a caring person’s home with a large open wound on her back. The homeowner took in Mama and cared for her wound which eventually healed after two weeks. Unfortunately, the rescuer could not afford to have Mama seen by a vet and she wasn’t aware of 4 Paws 1 Heart. Although the wound has healed, Mama can no longer use her back legs. Mama was seen on Friday and after blood work and x rays were completed, nothing definitive could be found to determine why she can no longer walk. Although she doesn’t appear to have an infection, she was given antibiotics. The initial infection caused by her wound may have affected her spine. I have been in contact with Dr. Kern of Pawsitive Steps Rehabilitation & Therapy for Pets and Mama will be seeing her in the next few weeks. Please say a prayer for this very sweet kitty who is estimated to be about 5-6 years old. ~ diana 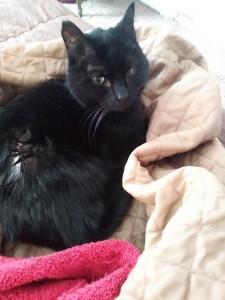 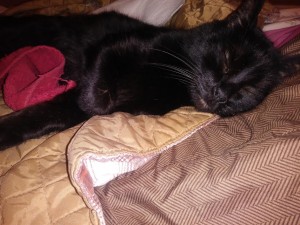