3/26/18 – We were contacted in mid-February about an “amazingly friendly” feral who had been showing up to be fed over the past six months. The kitty, Soots, appeared to have a serious upper respiratory infection (URI). The kind caregiver wanted to give Soots a forever home but needed help with the vet visit. She was understandably concerned about bringing an outdoor stray into her home with her current cat. Soots was treated twice for his URI and tested positive for FIV. During one of his visits to the veterinary hospital he bit a vet tech and had to be quarantined. The caregiver was shocked in that Soots had never shown any signs of aggression in the many months she had been feeding him. After two days in quarantine at the hospital, I was able to convince the rescuer to quarantine Soots in a separate room within her home. I also suggested he be retested when the infection was totally gone. Soots is scheduled next week to be neutered, vaccinated and retested. Please say a little prayer for Soots that his first test proved to be a false positive. We have had cases in the past where once an infection cleared, the cat no longer tested positive. ~ diana 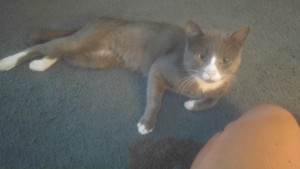