4/24/18 – Beautiful Aria — Our friend Roberta K. was contacted recently about a cat in a feral colony who needed medical attention. Roberta was able to trap her and saw that there appeared to be something wrong with Aria’s eye. We were contacted and we had Aria seen by one of our favorite doctors at Patterson Veterinary. Aria was seen Saturday and it was confirmed that she has a cataract resulting in almost total blindness. Roberta will work with Aria in hopes that she can be domesticated so that a forever home can be found for her. Aria was already spayed so there is a good chance that she was a pet at one time. ~ diana 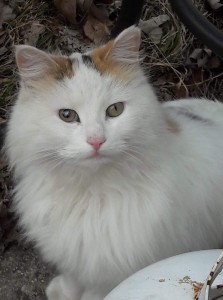