6/25/18 – Montana was used by a backyard breeder, likely kept in the backyard, in horrible living conditions where her repeated ear infections were not treated. Her ears formed scar tissue that narrowed her ear canal and trapped bacteria and infection, while continuing the cycle of more ear infections. Despite the pain and discomfort involved, she is very sweet and generous with her love and affection. Montana found herself in a municipal shelter where she would have been euthanized due to her medical costs, but staff/volunteers lobbied to give this girl a chance which is how she ended up with I Heart Dogs. During her first ear surgery, her ear canal was closed and she has lost hearing in that ear. I Heart Dogs elected to save her hearing in the second ear (where there was less damage) and 4 Paws 1 Heart was happy to contribute to this surgery. Eventually, Montana will be available for adoption through I Heart Dogs, Warren, MI. ~ diana 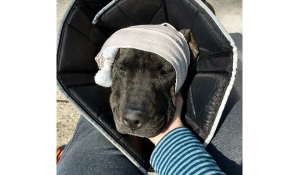