“I met this dog back in February. He was living on a chain in the middle of a backyard. He had a dog house but that’s it. No water, no food, no straw, no bone to chew on…
I started providing food and straw… and started the vaccinations on him and his yard mate.
One month later Cuz and his yard mate were surrendered to me.
I teamed up with Diana and 4 Paws 1 Heart to finish up his vetting.
On the day of his neuter we learned he was heartworm positive. We opted to neuter and deal with the heart worms after.
He was immediately started on doxycycline for the heartworm treatment. He was then moved up north to get some one on one with a human and learn some house manners.
He has been taking it all in stride and gaining weight at a steady pace.
Today is the day we’ve been waiting for… he is officially heartworm negative!!!!
Because of 4 Paws1 Heart his quality of life has greatly improved. – Megan” 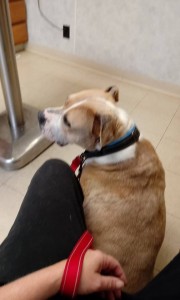