8/30/18 – The life of an outdoor, intact animal is a difficult one. We received an e mail from someone who had been feeding a cat who became pregnant. She didn’t see the female for a little while until one day mama and 5 kittens emerged from the woods. An attempt was made to find the owner of the mama cat without any luck. But a couple of days after the mama was seen with the kittens, a woman and her daughter showed up on the property looking for the mama who they had been trying to catch. They were told to not take the mama because she was still nursing the kittens and they left. But then, the mama was never seen again and the kittens could be heard crying. In the end, two kittens were never seen again, one kitten was hit by a car and killed, and two kittens were taken in by Denise (the person who contacted us). Mellow and Sputters have been socialized by Denise and they have since been spayed/neutered, vaccinated, and tested, complements of 4 Paws 1 Heart. Anyone interested in these little beauties should contact: denisembrown@gmail.com 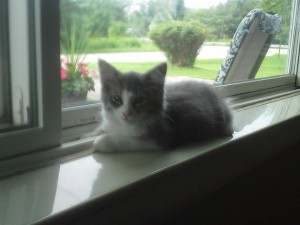 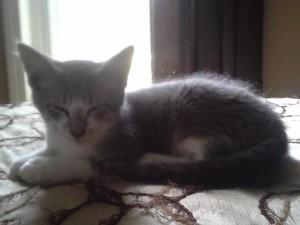