10/10/18 – Fluffy was found on the street. The poor little guy was matted and loaded with fleas so bad that when he was shaved, he was red from blood from the fleas biting. He had a growth on the side of his face, along with a bite wound that had gotten infected. His system was full of bacteria which kept him hospitlized for over 2 weeks. His little system had formed little pimples filled with matter all around his penis area. He was treated aggressively with antibiotics and it eventually cleared. 4 paws 1 heart was happy to assist our friends at Make A Difference pay for Fluffy’s medical needs. If you are interested in giving Fluffy a forever home, please contact them directly. ~ diana 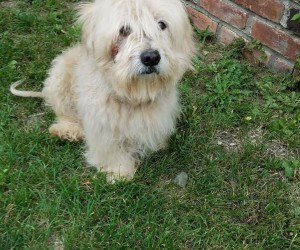