9/24/28 – WHAT A SUNDAY!! Before I even had time to report on this, an owner was found — but not before 4 Paws 1 Heart paid for a veterinary visit. We were contacted last Friday about a very thin kitty who was found outside of the woods near a vacant motel. His collar was severely imbedded into his neck and arm. The finder was able to cut off the collar and literally pull it out of the skin but the damage had to be treated. The collar did have a phone number on it and the finder called several times leaving messages. In the mean time, the kitty was taken to the vet where the wound from the imbedded collar was treated and he was vaccinated, treated for fleas, tested, and dewormed. Saturday night, the owner returned the finder’s calls. The owner lives in Ohio and travels with two cats in his truck. During one of his stops, the kitty escaped and he has been heartsick because he has been missing for awhile. The owner drove back to Michigan yesterday and picked up his cat and made a donation to 4 Paws 1 Heart. The lesson — don’t travel with unleashed animals because you never know what will happen. And, please, microchip your pets. ~ diana 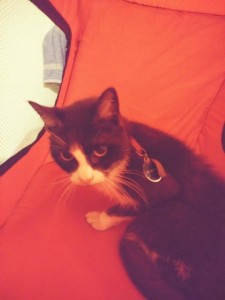 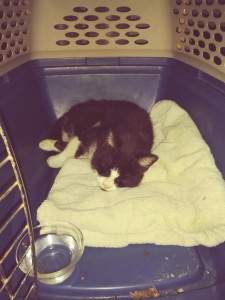 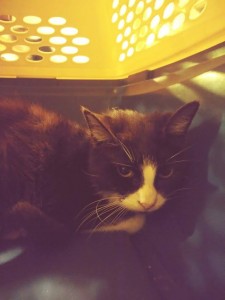