9/23/18 – WHAT A SUNDAY PART II – As I reported earlier, Chauncey was taken in by Ferndale Cat Shelter. He was scheduled to see a specialist today. But then, at about the same time I was getting a message from someone asking for their cat back and responding that I needed more information, I received a message from Ferndale Cat Shelter advising that Chauncey’s owner was found. It turns out that his name is Twinkie and he is 13 years old. The owner said that her daughter has had him since he was a kitten and that his injury was the result of being electrocuted when he was chewing on an electrical wire. The owner said that he recently started going outside. Chauncey was returned to the owner yesterday. It is amazing that in his deformed condition, he was able to survive. His Guardian Angel was definitely watching over him. – diana 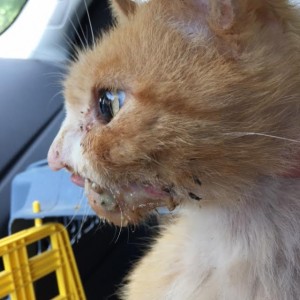