10/27/18 – The other night I was contacted by our friend, Megan, asking if we could assist in having Fatty humanely euthanized as his body functions were breaking down and she didn’t want him to suffer.. Here is his story. RIP Sweet Boy ~ diana

“This is Fatty. He was already neutered and not really feral. He had been in a cat community and when it was discovered that he was domesticated, he was taken in by an awesome family who knew that they would have to foster him until his last day because of his age. It appeared he had been abandoned by his family. Fatty claimed his new rescue family as his own. Over the last few years he has started to slow down and show his age. The vet estimated him to be around 20-22 years of age. Today Fatty told us that it was time to cross the bridge. With the help of 4 Paws 1 Heart, he peacefully crossed the bridge being held with love and care.
Rest in heaven sweet boy.- Megan” 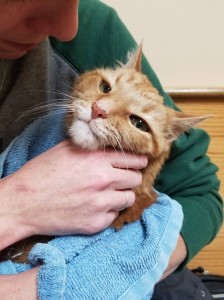