12/14/18 – RIP Sweet Marshmallow. Heroes of animal advocacy spent days looking for this very sick and injured cat. The 14 year old caretaker of the cat colony from which he came was devastated when he showed up in this condition. After several days of searching through vacant homes and neighborhoods, he was finally captured and we authorized him to be taken to the emergency vet. Although he appeared to be at death’s door, for awhile it looked like he might make it. But then the blood work came back. The red blood cell and platelet count was closer to that of a deceased animal. He had feline leukemia and, if he survived, he would need surgery for his broken jaw. But that surgery couldn’t happen for weeks, if at all, because of his blood results. So amongst the tears of his hero, Kimberly Wiley, a very caring veterinarian, Dr. Stomack, and mine, it was decided to release Marshmallow from his suffering and to let him peacefully cross the rainbow bridge. – diana
4paws1heart.org/donations/ 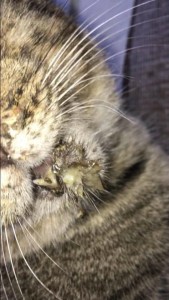