2/7/19 – RIP Sweet Buddy. This morning we woke up to crushing news, Buddy died. On Wednesday morning Buddy was taken to the Animal Neurology Center where he was found to be anemic and dehydrates. He was put on fluids and x rayed where it was found that he had a herniated disc that may have resulted from an old injury, such as being hit by a car. His knee was also swollen and in chronic pain. The doctor thought rehabilitation and steroid management may be the next steps but wanted Buddy to have a CT Scan and MRI which was to be done this morning. He was resting comfortably in the hospital until early this morning when he started vomiting, panting, and breathing heavily. An ultra sound was done and it was found that Buddy had significant fluid in the abdomen which appeared toxic. Gastric perforation or another cause of septic abdomen was suspected; possibly the high doses of prednisone. Buddy was such a sweet boy that all of our hearts are breaking with the news. Our only comfort is that Buddy died knowing love and care and wasn’t alone on the streets to be prey for others while he laid there unable to move. A huge thanks to all of those who tried so hard to save this boy. ~ diana
4paws1heart.org/donations/ 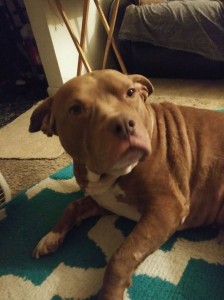