I am desperately asking for your prayers and for a miracle. In Jan 2016 I was working at emergency when this beautiful girl that we named Noel, was brought in. She was dying of Parvo virus. The family could not afford to treat medically, they were breeding to sell pups for money, and they decided to bring her home despite my offer to surrender her to 4 paws 1 heart for care. A couple days later they brought her back offering to surrender her because she was on the brink of death. We immediately provided the most aggressive care for parvo treatment which involved a blood transfusion, medications, days of hospitalization and IV fluids. This little 5 month old pup was so dehydrated and had lost so much weight, but she survived. I used a couple sweaters that belonged to my dog so that she could keep warm while she was hospitalized.

She made a full recovery and was adopted into a very loving home. The best home I could ask for. I have just received news that she was diagnosed with Lymphoma. I am begging for prayers. I have posted a few before and after pictures along with a couple messages from her mom from when she was initially adopted. It is not fair.. My heart is breaking for this family. Gina 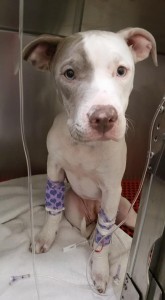 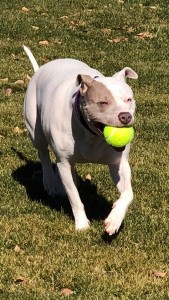