6/14/19 – A good friend of 4p1h, who is always there to help an animal in need, came across a man trying sell a 4-week old puppy. He kept yelling at the puppy to “shut up” while the puppy laid on the early April, cold cement. Shelley could think of nothing other than to buy the puppy to save him from an unknown, potentially dangerous fate. Before she did that, though, she contacted us to see if we would cover the medical and of course we said yes. Samson was taken to the vet and he was given a wellness exam and dewormed; he was too young for any vaccines. After contacting some animal rescues, Rebel Dogs Detroit agreed to take in Samson where he will be well taken care of. It truly takes a village. – diana
4paws1heart.org/donations/
#Samson the Puppy 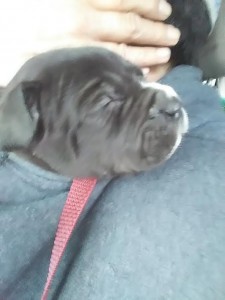