7/4/19 – We recently posted Jax’s story. He was taken to the emergency last weekend. He was emaciated, had a severe upper respiratory infection and we were afraid he wouldn’t make it. He only weighed 9 ounces (equivalent to a 2 week old cat) yet he was 4-5 weeks old. He was given fluids and treated and later was taken home to be treated there. A couple of days later, Jax’s two brothers were rescued. Although a little emaciated and having upper respiratory infections, they were in better shape than Jax. Jax, Opie, and Clay were all taken to the vet (for Jax it was a follow-up visit) and given antibiotics for their infections. 4 Paws 1 Heart will take care of the rest of their medical needs when appropriate. We are, again, so thankful for the many kind people who rescue and take in these poor, innocent animals left to suffer and die on the streets. ~ diana
#JaxOpieClay 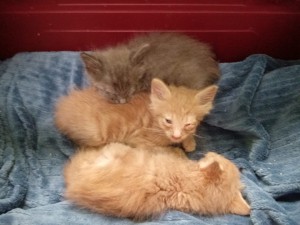 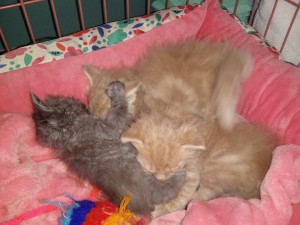