7/14/19 – RIP Sweet Toto – I received a frantic call late last Thursday about a 14 year old dog who had a seizure and was bleeding. Nicole, the person who contacted me, had just recently rescued Toto when his owner died. The family was going to take him to a shelter. And, having a senior dog already, Nicole couldn’t stand the thought and took him in. I authorized Toto to be seen by some of our favorite doctors at Advanced Animal Emergency where he was stabilized and given medication. Later that evening Toto was released with plans to have him seen the next day. Toto had a good night but Friday morning he had another seizure. Although they were booked, our great vet partner, Patterson Veterinary, took in Toto where he received x rays and blood work. Unfortunately, it was found that Toto had numerous issues with his organs. Under the doctor’s recommendation and agreement by Nicole, Toto was peacefully humanely euthanized. To lose two seniors in one week was absolutely devastating for Nicole and we sincerely thank her for taking in Toto and giving him much love in his final days. Here is a photo when he was rescued and one just before seeing the doctor on Friday. – Diana 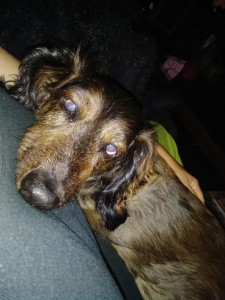 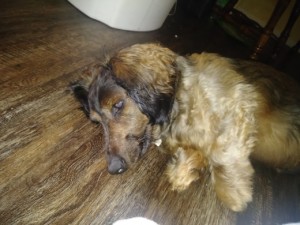