9/11/19 – Prayers and positive energy for this poor abused female. I will call her Jane Doe because she has been in the hands of far too many bad people. A couple of days ago I received a call from a long-time rescuer and friend about a dog needing medical attention. Unfortunately, at the time, our friend did not know the severity of Jane’s injuries. She was only told that Jane had been attacked by another dog and had injuries to her ear. Of course, I authorized the vet visit and yesterday, sweet Jane was operated on. I’ve only included photos that weren’t as graphic as others. They were sent to me by the vet but trust me when I say that her wounds were much greater than you can see here. She had several bite wounds to her head, one so great, the bite was into her scalp. She had three stab wounds, one slit was within an inch of her aorta. Her ear and side face was mangled and her stomach was laced with scars. Her teeth were either ground down, removed in some cases, or were damaged because, instead of having food to eat, she tried to eat rocks. While the doctor was trying to repair Jane, the staff was crying over thinking what this very sweet dog had gone through. Here is the very sad story of “Jane”.

She belonged to a woman who is now in prison for murder. Jane was kept outside the majority of the time and never had enough food. When the owner went to prison, Jane was in very bad physical health and the friend of the owner took her in and helped her get healthy again. But then the friend was told to give Jane to the ‘owner’s’ cousin. That cousin neglected/abused her and then gave her to someone else. This cycle kept up. Poor Jane went from place to place, each time with the owner’s demands and after each stay she would be returned in very poor physical condition to the friend. We suspect that Jane was used for breeding and possibly used as a bait dog. We do know that when she was eventually picked up by our rescue friends, Jane was kicked out of the way and then turned over to the rescuer in the horrible condition that was described.

Unfortunately, there are far too many ‘Janes’ in our communities being abused, used for dog fighting, or at the very least, neglected. The vet staff told me that although Jane has been to hell and back, she is one of the sweetest dogs they have met. She is happy, wagging her tail, and just wants to be petted. Without your donations, 4 Paws 1 Heart could not help all of these animals with their medical needs. We don’t know how much Jane’s surgery will cost and we will continue to work with her rescuer to make sure she gets all of the medical attention she needs. So, if you can afford a donation today, we would greatly appreciate it. A huge thank you also to the staff at Five Mile Animal Clinic, they are caring and just plain wonderful people. ~ diana
4paws1heart.org/donations 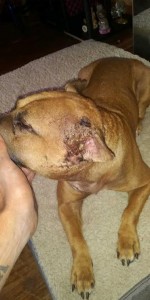 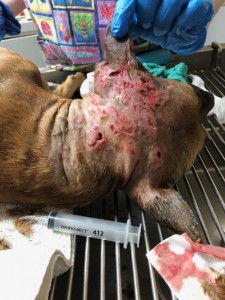 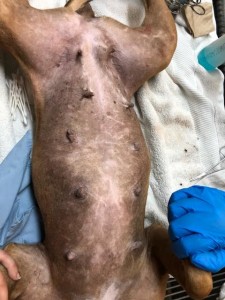