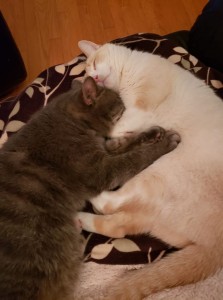 Bob and Simon are two very special kitties who we helped in late 2017. Simon (white kitty) was thrown out during a snow storm resulting in 8″ of snow. I received a call from the son of a woman who had rescued Simon but was renting a room from a woman who kept throwing Simon outside because he would escape the rented room and sometimes urinate/defecate outside his room. The rescuer was at work during this snowstorm when the son sent 4p1h a message. Poor Simon was out in the snowstorm and there was no where for him to go. I contacted our friend, Jo, who jumped into action and with some coordination was able to rescue Simon and bring him to her home. Little did we know that Simon could not walk. We did everything we could to provide Simon therapy but he just was not progressing so today he lives a life of love and warmth in Jo’s home. Until this day, I cannot imagine how evil you would have to be to throw out a totally paralyzed animal into the snow with no way to fend for himself.

Bob was left behind by his owners; probably because of his diarrhea. His diarrhea was so bad when he was rescued that feces would just spill out of his little body. He also has asthma. Again, our good friend, Jo, rescued him and has given him a forever home knowing he would be difficult to adopt to another family. Bob was diagnosed with IBS but he has a loving, warm home and a great buddy in Simon. They are constantly seen cuddling together. In both cases, 4 Paws 1 Heart has continued to be committed to Bob and Simon because they are not adoptable but we appreciate that they’ve been giving a loving home with our friend and independent rescuer, Jo.
We could not do it without our Village and supporters. ~ diana
4paws1heart.org/donations/
P.O. Box 84, St. Clair Shores, MI . 48080