1/8/20 – UPDATE: I have since talked with the vet hospital, the person who originally contacted us, and Chance’s mom, whom I had asked to contact the rescuer to give advice on how to give the medicine because she was having a problem. She also offered to find a foster for Bubbas because the rescuer said she was overwhelmed. The doctor who saw Bubbas on two occasions did not see what you see in these photos. We believe Bubbas went down hill between the time he saw the doctor and when the third party got involved and took him to the emergency hospital. I spoke to the doctor’s office this morning and they advised that they had called the rescuer to see how Bubbas was doing and they were informed that he had been humanely euthanized. Unfortunately, the rescuer was not experienced in this area. We have worked with the original doctor for years and she is the best in the field. 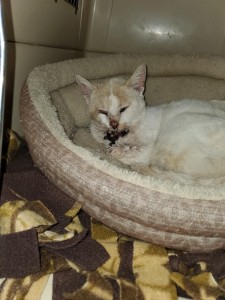 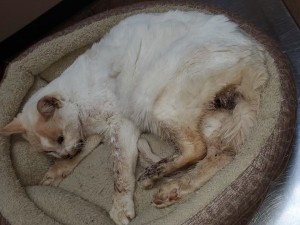 1/7/20 – RIP Bubbas. His story was a little confusing because of the number of people involved. 4 Paws 1 Heart had authorized his medical visit last week and within a 3 day period paid over $600 to have him tested, blood work done, examined, and given antibiotics. I personally spoke with the doctor and there was no indication of the severity of the situation as is seen in these photos. The doctor did say that there might be something going on that she could not visually see and that he might have Cat Scratch Fever, so she requested approval for blood work. Also, the cat had to be isolated because Cat Scratch Fever is contagious to humans. At 3 a.m., January 6, (some 3 days later)I received a phone call from a emergency hospital that we don’t work with, advising me that Bubbas had been brought in and they wanted to hospitalize him. I did not receive a diagnosis or a prognosis just an estimate of $800 to $1,600. After trying to find out what went on between January 3 and January 6, the person who had originally contacted me for help and who had just picked up the cat from the finder, made the very difficult decision to let him cross the Rainbow Bridge. The person who contacted me did not know the person who had the cat — she just saw a plea for help on facebook. This is very heartbreaking. It doesn’t make any sense to ‘rescue’ an animal if you truly aren’t going to make sure that animal has a warm, safe place to live and you are experienced if medical attention is needed. I absolutely feel so bad for Bubbas. I try my best to promptly respond to requests for help, but in this case, I should have done more to make sure this cat would be in a good situation after the medical care. – diana
4paws1heart.org/donations/
Share