2/28/20 – A Happy Update for a a fun Friday. It was back in October when I was contacted by a long-time friend of 4p1h about a cat she had found in some bushes. His fur was missing in many spots, his tail was swollen, and he was limping. She named him Angel and we authorized him to be seen by one of our partner vets. Angel had to be put under to have x rays taken, so, while he was under, the vet took advantage and neutered him. In the mean time, it was discovered that Angel’s pelvis was broken. The doctor said the tail might have to be amputated because at the time Angel was not moving his tail. It would be a wait and see situation. Angel was given antibiotics and pain medication and our friend, Tonya, was told to keep him on crate rest. Well, this week, Tonya sent us an update. She has fallen in love with him and has renamed him Enzo because he reminds her of a “Grumpy Sicilian”. He gets along with the other cats, his tail healed and he’s ‘moving it like crazy’. Enzo is now living the great life. We are so very thankful we were able to make a difference in Enzo’s life. I told Tonya that I also have 3 Sicilian cats — Nunzio, Sophia, and Luigi and they’re only grumpy when they want to eat. Thank YOU, once again, to our many supporters, our amazing vets, and, as always, the caring people who don’t turn their back on an animal in need. ~ diana
4paws1heart.org/donations/ 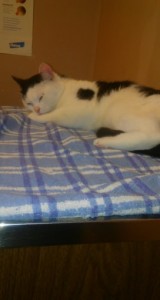 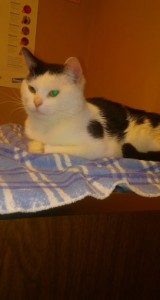 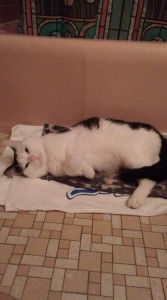