5/6/20 – Meet Salem. A kind woman was trying to trap a pregnant cat but instead caught Salem with another buddy. Although she eventually found rescues willing to take them, no one would take Salem because he had something wrong with his paw; he couldn’t put weight on it. That’s where 4p1h came in. Our rescuer was able to find a veterinary hospital in Monroe, MI who would work with us and we agreed to pay for an x ray and any additional treatment. Salem was just released a little bit ago and, thankfully, there were no broken bones. His paw was very swollen and he did have a fever. Consequently, Salem was given some pain meds and antibiotics and he will be taken in by the rescue upon his recovery. He will also, of course, be neutered. Once again, a huge thanks to the amazing people who continue to rescue these innocent animals who need our help. ~ diana
4paws1heart.org/donations/ 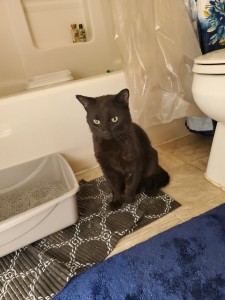