6/15/20 – RIP Blackie. Our good friend Kimberly Willey called yesterday afternoon for help. She was on the road and found a cat in desperate need of medical attention. He was very thin and appeared to have a prolapsed rectum. We could not get him into a day practice so we made arrangements for him to be seen at our partner emergency hospital. Little Blackie was very il and the doctor said that there was at least 6″ of intestines hanging. The blood flow had already stopped. Because of his overall condition, surgery would have been very dangerous for him. It was decided to put Blackie out of his obvious pain and let him move on to the Rainbow Bridge. The only comfort we can all find in these cases is that this little guy did not die alone, suffering on the streets but died in dignity and love. – diana
4paws1heart.org/donations/ 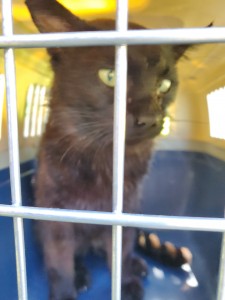