7/17/20 – Gloria, at approximately 3 weeks old, was found lying lifeless on the trash put out on the curb — no mom could be found. She had a wound on her neck and she was covered in fleas and flies. She was taken into the first vet we could get her into and she was treated but unfortunately after a few days, the rescuer contacted me to advise that Gloria had not had a bowel movement. She was taken to another vet who treated her for severe constipation and also treated the wound which was actually a burn, possibly purposely done. She is doing good as of now and her rescuer was able to get her into a home where the caretaker is more expert in taking care of a bottle baby. – diana
4paws1heart.org/donations/ 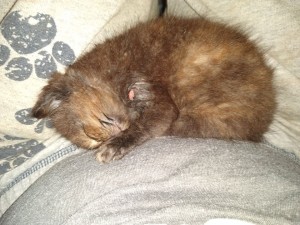