8/4/20 – The “Kitty of the Corn” was dumped at a very kind couple’s house. The very young kitten had a huge, horrible abscess on her neck and although the couple tried to find a doctor who would prescribe antibiotics, all, understandably, wanted to personally see the cat. The couple has not been working regularly because of the virus and contacted us for help. Kitty was taken to one of our partner vets who confirmed that this was a very nasty infection that kept growing. Part of the dark spot (as you can see in the photo) was old tissue, hair, and dirt. The doctor was able to ‘rip’ that off pretty quickly, cleaned it, and stitched it up. She then was tested (negative) for FIV/FeLV, and given basic vaccines. When she weighs enough, she will be spayed. This morning the rescuer sent me a message saying that “Kitty” is doing great and will have her stitches out in two weeks and then scheduled for spaying. “Kitty is right back at being lovey and playful”. And, she has obviously found her furever home. Just as a side note, I don’t usually share some of the injury photos we get but I think it’s important for the general public to know of the kinds of injuries and illnesses these animals have been facing, more in the past five months, than I’ve ever seen in a similar period over the past 10 years. I thank God every day for the many people who rescue and provide furever, loving homes, and to our friends who are so 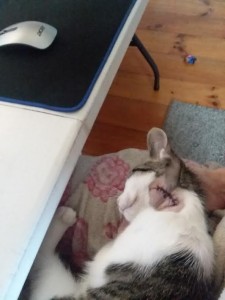 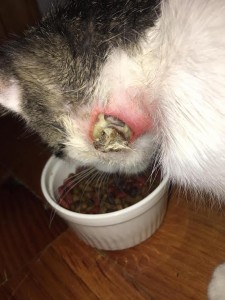 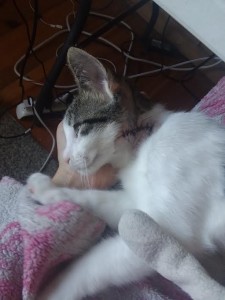 generous with their donations. – diana
4paws1heart.org/donations/