Chance returned home last evening The doctors are still unsure as to the cause of Chance’s fever but the family is happy to have him home and he will have follow-up visits with Dr. Kern of Pawsitive Steps and Dr. Zalac of Orion Animal Hospital.

Charlize – The kitten who was taken in by Eastpointe Animal Control Chief Brian Pylar was also released from the emergency hospital yesterday. Charlize had been given to a person standing by the side of the road, thepeople in the car were going to throw her out of the car but instead handed her over to a stranger. Fortunately, that person brought the very injured and sick kitten to the police department and they contacted Chief Pylar. Upon examination it appeared that Charlize had been burned over much of her body with some 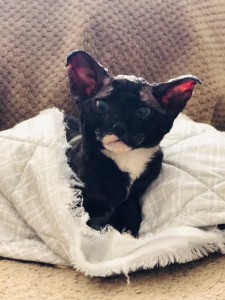 type of chemical. There was missing fur where it appeared that someone tried to shave her to hide the burns. Chief Pylar reported that when he picked her up, her underside and her paws were wet. There was some discoloration on her white chest that looked like someone tried to spray her off with water. He believes that someone was trying to spray off a flammable substance and intentionally did this to her. The doctors confirmed that she was burned with some type of chemical substance. Charlize is doing good and is in an experienced foster home where where she will be given her medications and lots of love. Here is Charlize after she was picked up. – diana
4paws1heart.org/donations/