Skip to primary content
10/2/20 – George was a friendly stray who had been trap, neutered, and returned (TNR) until he was hit by a car. Because he was limping, the finder took George to an emergency hospital where several x-rays were taken. George’s injuries were minor and the finder contacted us for help with paying for the medical treatment. Because of a special needs child, the finder is seeking for placement for George who is very sweet and gets along with dogs. He is doing well but it’s obvious that he would like his own home so he doesn’t get hurt again outside. Ferndale Cat Shelter has placed George on their petfinder site in case you are interested in adopting him.
https://petstablished.com/public/search/pet/864232
– Diana
Update: 10/27/20 – George has found a furever home.
4paws1heart.org/donations/ 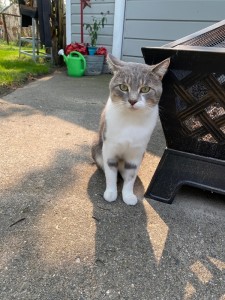