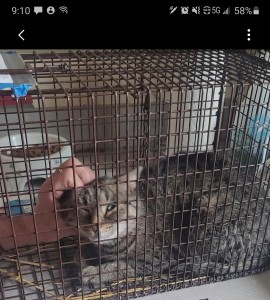 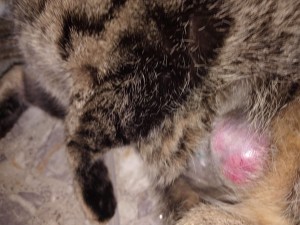 11/27/20 – I hope everyone had a wonderful Thanksgiving and that you were able to enjoy the day with those you love. We continue to be so thankful for our many supporters, our partner veterinary hospitals, and the caring people who never turn their back on an animal in need. Bonnie Cushing is one of those people.
Bonnie contacted us when she learned that a cat she had picked up to be TNR’d had masses along her mammary chain. This poor 7-8 year old, very friendly female, Pepper, was left behind when the owners moved. Pepper was seen today by Dr. Zalac and she advised that although the mass wasn’t as bad as some she has seen, it still needed to be removed. Dr. Z didn’t think a radical mastectomy was needed but more of a lumpectomy. She did warn, though, that 75-80% of breast tumors in cats are malignant which means that even if the mass was removed, more might grow or the one she has might spread internally. Unfortunately, the only way to find out was to remove the mass and have it biopsied.
With so many animals needing help, what is the right thing to do. Do you go ahead with the surgery knowing there is a strong chance it could all be for nothing OR do you just let nature take its course and do nothing, knowing she will surely die. At least when an animal has to have surgery for a broken leg or has to have an eye removed, you know there is a strong chance the animal will survive and have a good quality of life. In this case there was no such assurances but after all this little one has gone through, I felt we had to give her a second chance. So, the surgery and biopsy was approved with Dr. Z and we will find out the results later.
Again I ask for your prayers for this abandoned girl. – diana
Share