Skip to primary content
1/25/21 – A CALL OUT for prayers! I was contacted by the owner of one of the veterinary clinics with whom we work closely. We were asked if we could help with this little guy’s medical. He will be starting treatment for FIP which can be deadly. The treatment has been successful but it is expensive and requires a serious commitment from the person caring for the cat. This is Apollo and here is his story:
Apollo was rescued from a hoarding situation where there were 30 black cats amongst a few others. Apollo’s foster family was asked to take him in along with a sister and brother. Unfortunately they only ended up with Apollo and his sister as his brother passed away from wobbly kitten syndrome, and while they were able to find an amazing home for his sister, they fell in love with Apollo and so did their other cat Orion. Apollo began to get sick in the middle of December. Because the family had been out of work due to the pandemic and were also facing human medical issues, they had to wait for their stimulus in order to get Apollo to a vet. But as soon as they received it, they rushed him to the vet. He tested negative for FIV and FeLV and no one could figure out what was wrong so the vet gave him antibiotics and pain meds. A week later he started declining faster and upon taking him back to the vet, he was diagnosed with FIP.
Here are some photos of this handsome boy, one with his buddy, Orion. As we often say, it truly takes a village to care for the abandoned and abused. I’m praying that we can give Apollo a second chance at the life he so much deserves. – diana
4paws1heart.org/donations/ 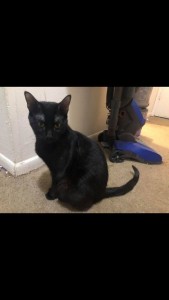