Skip to primary content
1/20/21 – As I said in an earlier post, here is a little guy who came into our lives July 30, 2020. His now mom, had been taking care of a cat community and Cheeto came walking into it. He had diarrhea, scratches on his eye, fleas possibly causing the fur that was missing around his neck, and was only eating treats. The poor guy would eat fast and was somewhat skittish; he was definitely malnourished. We started off having him seen by All About Animals because he needed to be vaccinated, tested, and neutered but they didn’t want to take a chance doing anything because of his condition; they suggested he be taken to a standard veterinary hospital. We authorized Cheeto to be taken to another partner vet who found he was FIV positive, and was drooling pus — after his mouth was examined, it was determined all teeth would also need to be removed. Once I heard of everything Cheeto needed to get him healthy, I referred him to one of our favorite doctors at Patterson Veterinary in Clinton Twp. By the end of September, Cheeto had been treated, neutered, vaccinated, and had all of his teeth removed. During this two month process, the rescuer and her friend fell in love with him and decided to give him a furever home. Yesterday, his rescuer and now mom reported that Cheeto is doing great and that they LOVE him. Thank you to our many generous donors who give us the ability to help these defenseless animals who have no where else to turn. – diana
4paws1heart.org/donations/ 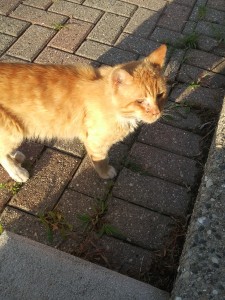