Skip to primary content
1/15/21 – In September, 2020 I received the following request for assistance:
“My name is Courtney and I am the director of Paws, Awes & Claws rescue. We have a situation that we would like to assist with, however this year has been a lot for us to keep up with. We have had three different cats need enucleation surgeries (two were double and one single which was unexpected) on top of more routine visits.
However, we have a foster who would like to help and take in two kittens in need. They are coming from a barn life, but their ailments make this difficult and the homeowner cannot afford their care and will not do anything further unless able to surrender them. One of the kittens has a problem with her rib cage. It feels as though it curves inward and seems to cause her pain. As she is growing it seems to get worse and she can not continue to live outdoors this way. She is called Squirrel. The other kitten appears to be very cross-eyed and is beginning to have trouble opening one of his eyes. They call him Cross-eyed Chris. We believe he may be suffering from entropion in one or both eyes causing this problem to get worse and worse as it does not appear to be a URI.
Squirrel is a tabby kitten probably around 9-10 weeks old and I believe she is over the weight to allow surgery soon if needed. However, Chris is small, maybe 6-8 weeks. I believe he appears to be smaller than 2 lbs although probably not by much. He is a little black kitten. I have attached photos of each.
We are wondering if your organization may be able to help us with the costs of taking in these two kittens. As much as it pains me to say it, we just can’t cover these costs right now while already trying to find ways to fundraise in this hard time to cover the current vet bills. Please let me know if this is something you would be able to help with.”
We said YES and had Courtney set up visits with one of the best Dr. Zalac at Orion Animal Hospital. It turns out that Chris has a congenital defect called egenesis which is being born without eyelids. Although Dr. Zalac had never performed this particular surgery in the past, she was confident that she could do it. And, we are also confident that Dr. Zalac can perform the surgery successfully. At the September visit, Chris’ eye had actually fused shut and needed to also be cut open, which was done. She wanted to see Chris when he was about 6 months old. As to Squirrel, Dr. Zalac felt that as long she was not having other issues, she should be ok. Dr. Zalac just advised that she be monitored in that her liver is outside of her rib cage due to her
deformity.
So, here we are and Chris is now about 6 months old and will be scheduled for his surgery. Squirrel will be getting spayed next week and she will again have her rib cage examined. Please say a pray for these sweet babies who owe their lives to a great rescue — Paws, Awes, and Claws, and our amazing and generous donors. Here are some photos from September and now. Chris is the black baby and Squirrel is the Tabby. – diana
4paws1heart.org/donations/ 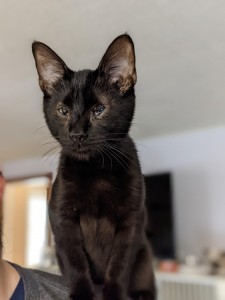 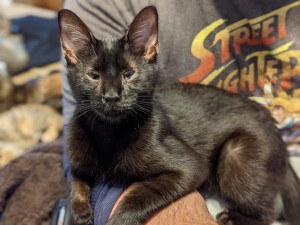 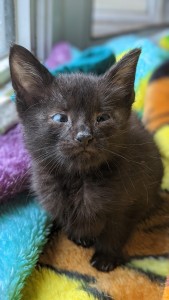 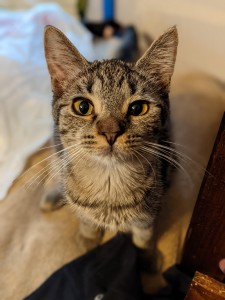 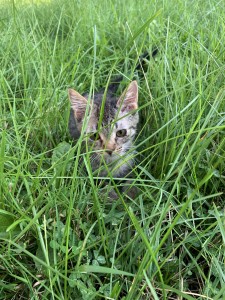