Skip to primary content
3/30/21 – Happy Update for Howie who was rescued after being attacked. The skin on his face was shredded and we covered his medical treatment. Here’s an update from his rescue, Saving Cats & Kittens:
“Howie really rallied after the antibiotics but he got an abscess on his leg, so they cleaned it out and he was neutered and vaccinated, He has two more days of antibiotics then he will be checked out again before he is released to where he was found (there is a caretaker). He is very feral but we loved him so much; he is very brave. He learned to use the litter box after much work and many blankets thrown out, lol. I think he might possibly have an issue with his ear but it could just be his skin is black there. It almost looks likes frostbite. We will have the doctor take a look when he goes in for his recheck. Deborah”
Feral or domesticated, because of you we can help make a difference in the lives of those who would otherwise die on the streets. Thank YOU to our donors, our veterinary staffs, the rescuers, and the fosters. – diana
4paws1heart.org/donations/ 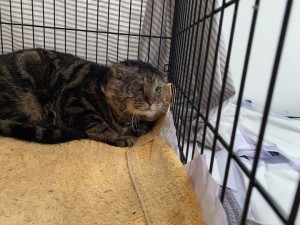